The program organized by Karadeniz Technical University (KTU) Sürmene Faculty of Marine Sciences within the scope of “Raising Social Awareness and Reducing Marine Litter Project for the Protection of the Black Sea Ecosystem” (LitOUTer), which was prepared to reduce marine litter, which is an ecological problem, was held at KTU Kanuni Campus.

Rector Prof. Dr. In his statement to the journalists, Çuvalcı said that he attaches great importance to the event, which was held with the slogan “Let the Black Sea not be garbage”. Pointing out the importance of raising awareness of especially children and young people about the collection and recycling of garbage, Çuvalcı thanked those who contributed.

Çuvalcı pointed out that KTÜ is the leader of the LitOUTer Project, which has 6 partners from 4 countries and is supported by the EU Black Sea Cross-Border Cooperation Program.

Emphasizing that the seas are rapidly polluted, Çuvalcı said that this pollution first spreads to seafood and then negatively affects human health after they are consumed.

Çuvalcı stated that he was happy to see the chirpy children and young people and said, “This awareness does not belong only to today, it should last a lifetime.” used the phrase.

Environment, Urbanization and Climate Change Provincial Director Korkmaz explained that sea pollution, which has been increasing rapidly in recent years, is one of the most important issues.

Reminding that microplastics have now been found to enter the blood of fish, Korkmaz made the following assessment:”This threatens human health, too. Information and awareness activities are of great importance in this regard. The biggest factors that cause pollution in the seas are land-based. Wastes thrown into streams and land go to the sea after a while. It is especially important to raise awareness of the public. Such activities are very important to raise awareness.”

Korkmaz emphasized that as the directorate, they carry out studies on the prevention of marine pollution, that they prepare an action plan within this scope, and that sea and stream cleaning is carried out in certain periods in line with the plan approved by the Governor’s Office.

Most cigarette butts collected in campus After the speeches, the students collected waste for about 30 minutes on campus in groups of 5 and 7, accompanied by supervisors.

LitOUTer Project Leader Assoc. Prof. Dr. Coşkun Erüz said that, after the waste collected at the event was brought together, the campus is normally cleaned regularly. However, he said that there are always solid wastes thrown out by careless and unconscious individuals, scattered around.

Erüz stated that more than 90 percent of the waste collected by the 8 teams was composed of cigarette butts, followed by plastic and styrofoam materials used in food packaging and covid-19 masks.

Pointing out that the waste on campus is based on individual use.  Erüz said: “As in the whole country, as individuals in universities, we have a insufficient sensitivity about not throwing cigarette butts into nature. We should never throw cigarette butts and food packaging into nature. All kinds of waste creates pollution, poses a danger to sea creatures. It harms both life, feeding and breeding areas. In order to prevent the pollution caused by plastic and other polluting chemicals carried to people by fish who feed on fish. We need to reduce solid waste pollution in our geography. “Even this active in university has shown us that our environmental awareness as individuals is not at a sufficient level. We need to increase this awareness, otherwise both environmental and human health will suffer.”

The solution is that we SHOULD NOT throw any single waste into nature. DON’T THROW , so that the BLACK SEA IS NOT FULL OF WASTE/MARINE LITTER, it has been determined as the project slogan and is used in all visual materials, education and awareness activities. 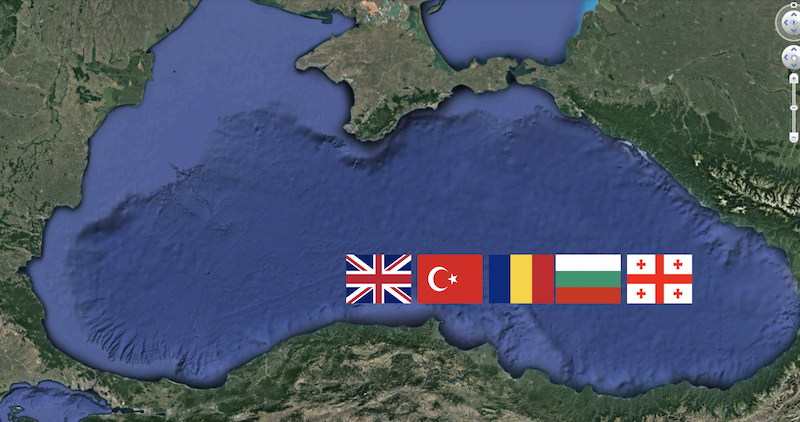 
This website has been produced with the financial assistance of the European Union and was funded by the ENI CBC Black Sea Basin Programme 2014-2020 (Project Number BSB785).
The contents of this website are the sole responsibility of Karadeniz Technical University and can in no way be taken to reflect the views of the European Union